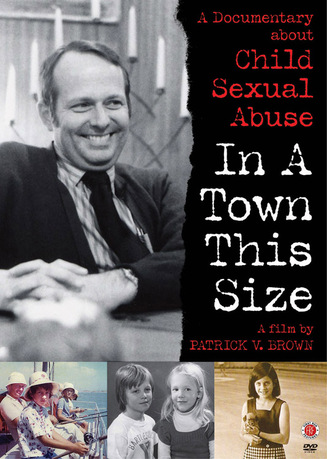 An Oklahoma Town, a Long-suppressed Tragedy

In A Town This Size introduces an Oklahoma town and its long-suppressed tragedy of childhood sexual abuse committed by a prominent and trusted pediatrician. The abuser is held, through this film and for the first time, to account for his crimes.

Covering events in the 1960’s and 1970’s and continuing into present times, the story is told through poignant first-person interviews with the victims, including the filmmaker himself; their families and professionals. It brings to its viewers an unnerving familiarity with the lifelong damage and cost of this abuse.

A Survivor becomes a Filmmaker to Expose an Abuser...

Produced by first-time documentary filmmaker Patrick V. Brown, himself a survivor of the doctor's assaults, a personal narrative unfolds regarding childhood sexual abuse endured by Patrick and his childhood friends.

Although none of these childhood and family friends spoke directly to one another about the abuse at the time it occurred, they now share their personal stories together on film. In this way In A Town This Size explores in a direct manner the pain, frustration and lifelong emotional damage done to these adults in childhood.

… as Bartlesville Shares Its Story...

Their stories devastate, frustrate and inspire, and hopefully empower audiences to confront child sexual abuse as societal and personal issues as well as legal and to press for changes to the inconsistencies of state statutes of limitation regarding this type of abuse.

… a Story Woven of Interviews with Survivors...

Direct, one-on-one interviews illustrate the trust between filmmaker and subject. Establishing a deeper representation of the personal lives of the subjects is accomplished through use of still photographs from the era, melded with video of the victims’ moving stories regarding the violation they experienced while at their most vulnerable.

The film explores the confusion of, and damage to those who were sexually abused, and whose trust in the support of their family and community was strained or broken. It explores their approaches towards healing and considers potential changes in the state’s statutes of limitations for such crimes against children. It emphasizes surviving sexual abuse, yet it does not diminish the violation and horror of the abuse. It illustrates instead that with determination, proper support and direct conversation about abuse, those harmed can choose their survival despite having been victimized.

… and Legal and Therapeutic Professionals.

Interviews with legal and therapeutic professionals are included to balance and complement those of survivors and their family members.

Legal professionals discuss potential legal remedies and the role that our current laws regarding the statute of limitations on crimes of child sexual abuse play in inhibiting justice.

Therapeutic professionals dispel some long-held myths about pedophilia while providing a larger perspective regarding the issues brought forth by the victims.

The Heartland as Our Mirror.

Oklahoma represents the “heartland” of the United States and is, therefore, a mirror for other places in our world where silence and denial allow the crime of pedophilia to exist.

As the film explores each story we see how the dynamic of power relations between child victims and the betrayal of a trusted man allow child sexual abuse to occur. We watch as the victims’ shame and society’s denial are examined and witness how survivors cope with the abuse throughout their lives. Interviews with the now-elderly parents of the abused as well as other family members describe the damage and pain the abuse of their loved ones has brought to their lives as well.

A National Dialogue on Trust.

In A Town This Size continues the necessary dialog regarding child sexual abuse by exploring yet another community entrusted with access to children – that of the pediatric profession. This documentary continues to foster controversial and necessary conversation in communities across the country as our nation grapples with the crimes of pedophila.